A transverse (also known as axial or horizontal) plane is an X-Z plane, parallel to the ground, which separates the superior from the inferior, or put another way, the head from the feet.

A coronal (also known as frontal or lateral) plane is a Y-X plane, perpendicular to the ground, which (in humans) separates the anterior from the posterior, the front from the back, the ventral from the dorsal.

A sagittal (also known as anteroposterior) plane is an Y-Z plane, perpendicular to the ground, which separates left from right. The midsagittal plane is the specific sagittal plane that is exactly in the middle of the body.

Body Aspect- Side and Front view 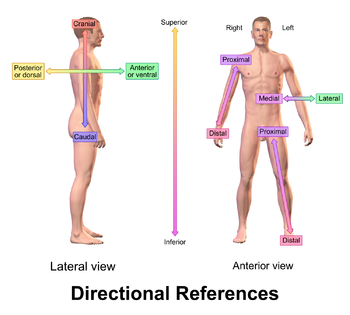 Anterior (ventral) refers to the ‘front’.

Posterior (dorsal) refers to the ‘back’.

In proximity to or ‘closer to’.

Distant or further away from.