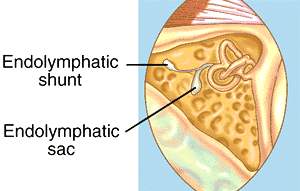 An endolymphatic shunt is a surgical procedure in which a very small silicone tube is placed in the membranous labyrinth of the inner ear to drain excess fluid. An endolymphatic shunt is placed as part of the treatment of Meniere’s disease. The surgery is based on the theory that the disorder causes the inner ear to become overloaded with fluid and that draining this fluid will relieve the symptoms.

A rarely used surgical procedure producing an opening in the horizontal semicircular canal through a mastoid cavity to improve hearing in hearing impairment of the conduction type due to otosclerosis.

Labyrinthotomy Surgical incision into the labyrinth; such as, the internal ear or the auris interna which is the labyrinth, consisting of the vestibule, cochlea, cochlear, vestibular aqueducts, semicircular canals and the mastoid bone.

A labyrinthectomy is a destructive procedure used for Meniere’s disease. The balance end organs are removed so that the brain no longer receives signals from the parts of the inner ear that sense gravity and motion changes. The hearing organ (cochlea) is also sacrificed with this procedure.

A mastoidectomy is a procedure performed to remove the mastoid air cells. This can be done as part of treatment for mastoiditis, chronic suppurative otitis media or cholesteatoma.

A mastoid cavity resulting from a canal wall down mastoidectomy can result in major morbidity for patients due to chronic otorrhea and infection, difficulty with hearing aids and vertigo with temperature changes. Mastoid obliteration with reconstruction of the bony external ear canal recreates the normal anatomy to avoid such morbidity.

It is  performed to enable easy access to the mastoid cavity to assist with cleaning for those patients who have had mastoid surgery. A meatoplasty concerns the soft tissue and cartilage of the ear.

A myringotomy is a surgical procedure in which a tiny incision is created in the eardrum (tympanic membrane) to relieve pressure caused by excessive buildup of fluid, or to drain pus from the middle ear.

Otoplasty  also known as cosmetic ear surgery  is a procedure to change the shape, position or size of the ears.

Ossicular chain dysfunction can be corrected with a surgical procedure called ossicular chain reconstruction. The procedure is an outpatient surgery that takes 30 to 40 minutes. It is performed under local or general anesthesia. The surgery is typically performed through the ear canal.

An operation for the management of extensive cholesteatoma; involves exenteration of the remaining mastoid air cells and removal of the posterior and superior walls of the external auditory canal and the remnants of the tympanic membrane and middle-ear ossicles to exteriorize the mastoid cavity and middle ear through the external auditorycana

A stapedectomy is a surgical procedure of the middle ear performed in order to improve hearing. If the stapes footplate is fixed in position, rather than being normally mobile, then a conductive hearing loss results. There are two major causes of stapes fixation.

A small plastic tube inserted into the eardrum to keep the middle ear aerated for a prolonged period of time. These ventilating tubes usually remain in place for 6 months to several years. Eventually, most will move out of the eardrum (extrude) and fall out into the ear canal. Also called ear tubes.

Otolaryngologist treats a lesion or other irritation to the tympanic membrane. Using an operating microscope, adhesions (or scar tissue, in this case) are removed from the surface of the eardrum.

Tympanoplasty is the surgical operation performed for the reconstruction of the eardrum (tympanic membrane) and/or the small bones of the middle ear.

Surgical interruption of the parasympathetic nerve supply to the parotid and submandibular glands by bilateral sectioning of the tympanic and chorda tympani nerves.