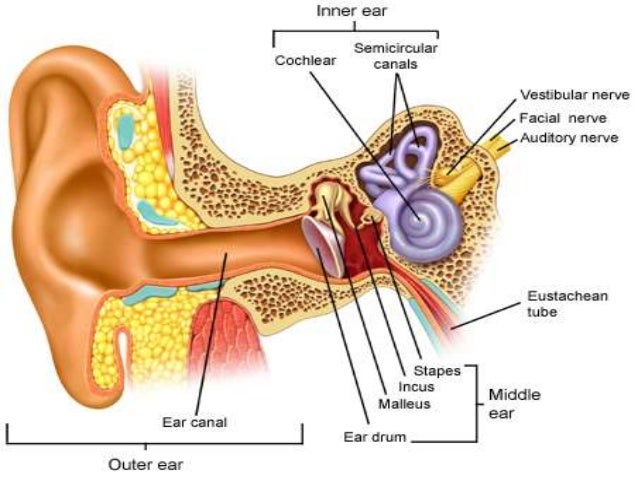 The ear is a multifaceted organ that connects the central nervous system to the external head and neck. This structure as a whole can be thought of as 3 separate organs that work in a collective to coordinate certain functions, such as hearing and balance.

The ear canal (external acoustic meatus, external auditory meatus, EAM), is a tube running from the outer ear to the middle ear. The adult human ear canal extends from the pinna to the eardrum.

The eardrum, also called the tympanic membrane or myringa, is a thin, cone-shaped membrane that separates the external ear from the middle ear. Its function is to transmit sound from the air to the ossicles inside the middle ear, and then to the oval window in the fluid-filled cochlea.

The tympanic cavity is an air chamber; it contains a chain of movable bones which transmit the vibrations of the tympanic membrane across the cavity to the middle ear.

The three tiniest bones in the body form the coupling between the vibration of the eardrum and the forces exerted on the oval window of the inner ear. Three tiny bones that are attached

3 thoughts on “Ear : A Brief Anatomy”