The muscular system is comprised of the sum total of muscles throughout the body that move the skeleton, maintain posture through steady contraction, and generate heat through cell metabolism.

The muscular system is composed of specialized cells called muscle fibers. Their predominant function is contractibility. Muscles, attached to bones or internal organs and blood vessels, are responsible for movement. Nearly all movement in the body is the result of muscle contraction.

There are 3 type of Muscle:

Humans have muscles in the face that permit a large variety of facial expressions. Because the muscles are used to show surprise, disgust, anger, fear, and other emotions, they are an important means of nonverbal communication. Muscles of facial expression include frontalis, orbicularis oris, laris oculi, buccinator, and zygomaticus.

There are four pairs of muscles that are responsible for chewing movements or mastication. All of these muscles connect to the mandible and they are some of the strongest muscles in the body.

There are numerous muscles associated with the throat, the hyoid bone and the vertebral column; only two of the more obvious and superficial neck muscles are identified as sternocleidomastoid and trapezius.

The muscles of the trunk include those that move the vertebral column, the muscles that form the thoracic and abdominal walls, and those that cover the pelvic outlet.

The muscles of the trunk include those that move the vertebral column, the muscles that form the thoracic and abdominal walls, and those that cover the pelvic outlet.

Muscles of the thoracic wall are intercostal muscles which are located in spaces between the ribs. They contract during forced expiration. External intercostal muscles contract to elevate the ribs during the inspiration phase of breathing. The diaphragm is a dome-shaped muscle that forms a partition between the thorax and the abdomen. It has three openings in it for structures that have to pass from the thorax to the abdomen. 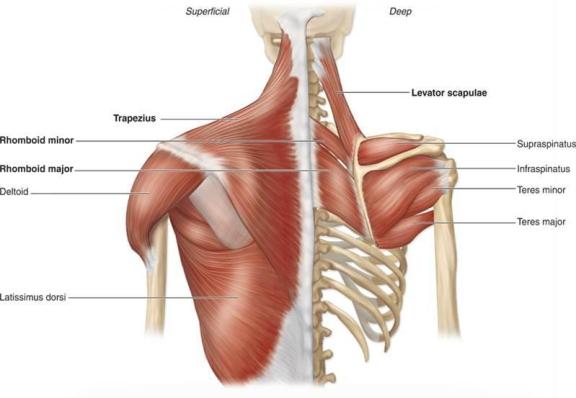 Muscles that move the shoulder and arm include the trapezius and serratus anterior. The pectoralis major, latissimus dorsi, deltoid, and rotator cuff muscles connect to the humerus and move the arm.

The muscles that move the thigh have their origins on some part of the pelvic girdle and their insertions on the femur. The largest muscle mass belongs to the posterior group, the gluteal muscles, which, as a group, adduct the thigh. The iliopsoas, an anterior muscle, flexes the thigh.

Muscles that move the leg are located in the thigh region. The quadriceps femoris muscle group straightens the leg at the knee.

The muscles located in the leg that move the ankle and foot are divided into anterior, posterior, and lateral compartments.