Fear can exist is in our thoughts of the future. It is a product of our imagination, causing us to fear things that do not at present and may not ever exist. That is near insanity. Do not misunderstand me, danger is very real, but fear is a choice.

Fear is a feeling induced by perceived danger or threat that occurs in certain types of organisms, which causes a change in metabolic and organ functions and ultimately a change in behaviour, such as fleeing, hiding, or freezing from perceived traumatic events.

Anatomy and Physiology of Fear

Fear is a natural phenomenon in human beings may occur in response to a specific stimulus occurring in the present, or in anticipation or expectation of a future threat perceived as a risk to body or life.

When anybody feel fear, the amygdala in brain sends signals to autonomic nervous system (ANS). The ANS send stimulus to our body then 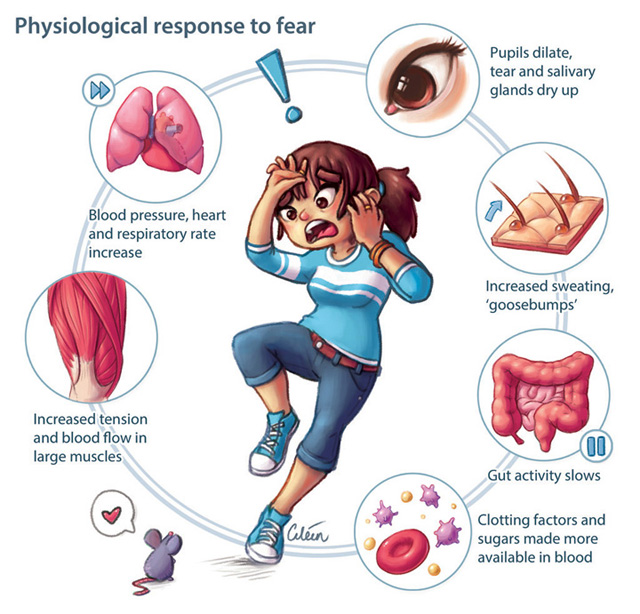 A number of regions in the brain are involved in sensing and responding to stimuli that result in the fear response. Like

This small region of the brain is part of the limbic system, processing emotions and unconsciously perceiving fearful stimuli. When fearful stimuli are present, then it sends signal to brain to compensate for the unconscious reaction and maintain the ability to respond.

In 2012,  Arch Gen Psychiatry published a new study has found a link between post traumatic stress disorder and the size of amygdala which is connected to fear response. Researchers found that smaller amygdala volume with stronger fear conditioning and stress response,

The hippocampus is another part of the limbic system and involved in memory. Memory plays a role in fear because it gives the stimulus and  is involved in fear learning and conditioning. Lesions in this region of the brain can result in inappropriate fearful responses.

According to a paper published in  journal “Molecular Psychiatry”in 2011 , In a fearful situation, newborn neurons get activated by the amygdala and may provide a “blank slate” on which the new fearful memory can be strongly imprinted. it means new neurons are likely helping to remember about the incident or disaster. We can remember emotional events much more strongly than daily experiences. This study found the connections between the amygdala and hippocampus help to encode this emotional information.

Research showed that amygdala’s signal pushes the hippocampus to make new neurons from neural stem cells. This provides completely new cells that get activated in response to emotional input. 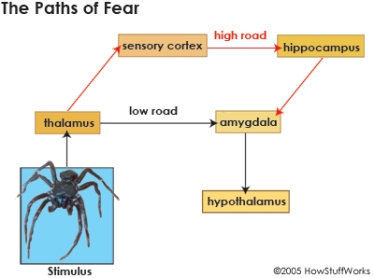 The sensory cortex includes portions of the cerebral cortex, that wrinkly outer layer of the brain that process and make sense out of information gathered by our five senses: vision, audition (sound), olfaction (smell), gustation (taste), and somatosensation (touch).  When the receptors process a stimulus for fearful response, the secondary sensory cortices interact with subregions of the amygdala that trigger the fear response based on memories stored and created by the hippocampus.

The thalamus is a limbic system structure and it connects areas of the cerebral cortex that are involved in sensory perception and movement with other parts of the brain and spinal cord that also have a role in sensation and movement. The thalamus is brain’s window to the world, it receives sensory input from your eyes, ears and other sources and sends these messages to amygdala and neocortext.

The brain gives enough time to expand domain of possible understanding, change perception of a situation and transform fear into something more constructive. 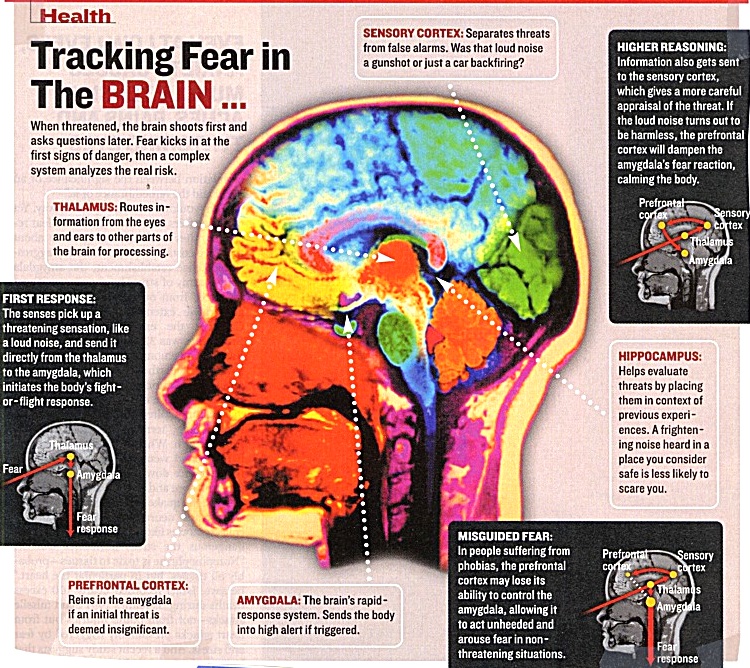 2 thoughts on “Do you know Brain is a fear Center”