The Antikythera mechanism is an ancient mechanical analog computer designed specifically to predict and calculate the positions and movements of stars and planets.It is among the oldest forms of computer, and was designed by Greeks in 86 BC. It was lost some years after its development, but was recovered in early 1900. 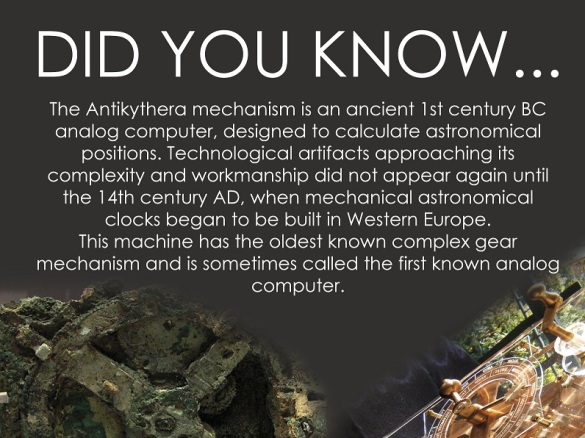 The Antikythera Mechanism discovery depend on the shipwreck inside the 45 meter level of water on the Greek island of Antikythera. Greek sponge divers found wreck in 1900.Among the wreck’s contents were a large number of bronze and marble statues, several bronze and silver coins, and several amphorae which probably contained wine and oils. But it became mystery for Greek archaeologist. Researchers failed to understand the mechanism .

According to history website, In 1902 , Archaeologist found and noticed one of the pieces of rock had a gear wheel embedded in it. Initially concluded as an astronomical clock.It is kept since then at the National Archaeological Museum in Athens, Greece. For more than a century, researchers were trying to understand its functions.

Investigation didn’t find any valid fact until British science historian and Yale University professor, Derek J. de Solla Price became interested and in 1974 Price published a paper of his new finding as 82 fragment of X-ray and gamma ray was made.

What is Antikythera Mechanism ?

The Antikythera Mechanism was made by the Greeks. Their contributions to art, philosophy, and architecture are known to all, but their advances in technology may come as a surprise. The device has at least 30 gears, and may have had as many as 50 or 60.

It could show lunar cycles, predict lunar and solar eclipses, and show the positions of the Sun, Moon and five known planets. It even accounted for the quadrennial athletic contests.

1971, Price and nuclear physicist Charalampos Karakalos found that they could use gamma and x radiographs to see inside the corroded lumps. The images produced showed a myriad of gears, dials, plates and small rings, some covered with inscriptions.

Forty years later in 2006, continued analysis revealed even more complex inner-workings and even more inscriptions. Work published by Tony Freeth and company hypothesized that the device also predicted both solar and lunar eclipses and even portrayed irregularities in the Moon’s orbit.

The front of the box had two large dials. The outer dial showed the 365-day Egyptian calendar. There are 365 ¼ days in the year and no leap year was used, it was simple just to remove the pin from the dial and move it over one notch (equalling one day).

The inner dial displayed the Zodiac calendar, which comprises twelve divisions of celestial longitude. The front of the device have dials to determine the locations of the five known planets: Mercury, Venus, Mars, Jupiter and Saturn.

The back side of the computer contained two spiral dials. The top one displayed the 19-year Metonic calendar, divided into 235 lunar months. An inner dial showed the 4-year Panhellenic Games and the 76-year Callippic cycle. The bottom dial displayed the 223-month eclipse prediction cycle, based on the Saros cycle.

Recent Investigations of the Antikythera Mechanism

In 2006 the Antikythera Mechanism Research Project  results opened a new chapter in the understanding of this extraordinary mechanism and he text is astronomical with many numbers that could be related to planetary motions, and the gears are a mechanical representation of a second century theory that explained the irregularities of the Moon’s motion across the sky caused by its elliptical orbit.

In July 2008, new results were published in Nature. These were focused on the functions of Back Dials of the Mechanism.

In July-August 2009,  Members and collaborators of the research project and leading historians of science and technology discussed the position of the Antikythera Mechanism within the history of science, technology and ideas

July 2011, a workshop took place in Athens and discussed new data about the front plate inscriptions and planetary data.

A new survey of Antikythera Mechanism also took place in 2014 .

In June 2016, publication of the full corpus of inscriptions of the Antikythera Mechanism.

Antikythera Mechanism proved that the founder of this mechanism is fabulous. In 1900  when science and technology was not on peak but these type of antique found . These are the base of present and future investigation.

So many investigation are going on this sophisticated mechanism. When we will understand this mechanism properly. Then it would become a great and advantageous research for human being.